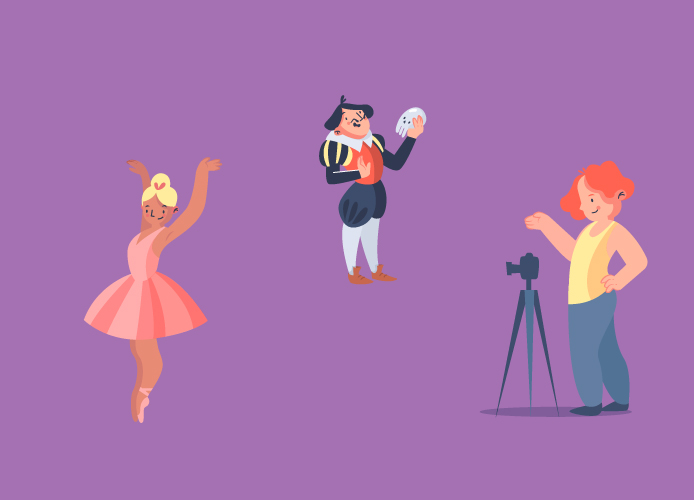 I Don’t Want To Play A Cop!

I imagine my story is similar to many queer artists.

I always knew I wanted to be a performer. Either that or a roller coaster tester, but I couldn’t seem to break into that industry. In school plays I was always cast as the villain or comedic relief, never the leading man or romantic interest. Probably because I was a very effeminate boy. I wasn’t seen as Romeo, I was Tybalt – a character that had some major homoerotic undertones – or Bottom (hold for laughter). And so from a young age I became a “queer actor”. While my identity was constantly under attack by classmates, theatre was the one place I could truly be myself without judgement.

When I auditioned for Ryerson U, I performed a medley of the Cell Block Tango monologues (I didn’t get in), and when I auditioned for York U, I performed the gay monologue from Six Degrees of Separation (I got in). I would fall in love with Angels in America and The Laramie Project. But as my training continued I began to worry I wouldn’t be able to “pass” in straight roles and started to distance myself from my queer sensibilities – I would restrict my mannerisms and vocal affectations – just like I had done before coming out in high school.

I was told that passing wasn’t a problem for me, but this denial of my identity had already done damage. I started to mock and pity out and proud queers for being too feminine. Things got worse when we moved into film work where you have to be even more contained. School ended and I began auditioning. To be a cop on Flashpoint. To be a cop on Rookie Blue. To be an old timey cop on Murdoch Mysteries. And I wasn’t booking.

I was over it. I had wasted so much time not having fun professionally or in my own god damn life by not being myself completely and totally. I left my agency, I bowed out of ACTRA status, and started looking for homegrown rough and tumble authentically QUEER theatre. I found the Gay Play Day Festival. And I was home.

My first Festival was in 2013 and it was a short play by Bruce Harrott entitled Couples. I could finally just be in my own body and the relief I felt because of that was palpable on stage. There was an actor in a show by the Festival’s producer, Darren Stewart-Jones, who I briefly connected with. It was amazing to be surrounded by other queer artists, as I had been the only LGBTQ actor in my conservatory at York. That actor was Nick May, who would become a constant collaborator and wonderful friend. I ended up being cast in that same show a few months later and played a queer Sherlock Holmes for the audiences of the Hamilton Fringe Festival. I’m happy to report that I have exclusively been involved in queer theatre since my initial perusal of it.

I went on to participate in three more Gay Play Days before the name change to the Toronto Queer Theatre Festival – a change that better represented the work being displayed. I’ve watched the Festival grow and be nurtured by Darren, who handed over the reigns to myself and Nick this past year. I’m co-producer of this Festival that I owe my queerness to. And now I owe it to my community to produce the queerest content I can.

Any cookies that may not be particularly necessary for the website to function and is used specifically to collect user personal data via analytics, ads, other embedded contents are termed as non-necessary cookies. It is mandatory to procure user consent prior to running these cookies on your website.